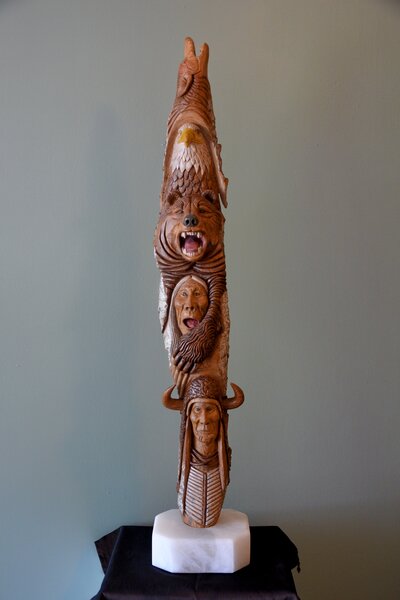 I grew up with lots of love and not a lot else. Art was the only thing I excelled at in
school. When I was ten, I got an eye injury and whiled away the weeks in hospital
doing drawings. When I got home, the most amazing gift of art supplies was waiting for
me – sent by one of the other patients who had seen my work. The generosity of one
man changed my life.

For many years, I have lived in the Cowichan Valley on Vancouver Island in BC. It is
both exceptionally beautiful and inspiring. I am surrounded by wonderful First Nations
and mainstream artists and their creative outpouring.

In the last few years, I have focused mainly on the carvings I do in Cottonwood Bark. I
love the contrast of the rough, unfinished bark, against the beautiful grain of the carved
wood. Each piece has its own flow as family groupings, spirit beings, plants, birds, and
animals appear. Sometimes I discover the “story” of a piece only when I am finished
and see the symbolism it carries.

I have recently been commissioned to do carvings to honour particular people. Working
with their photos and stories, I create a unique work of art. One woman said that “it was
the most beautiful gift she had ever received."